After departing Coos Bay we continued north, hugging the coast, drinking in the rocky, sandy, salty interface between land and sea that constantly switches from fog to clear skies, calm to a brisk breeze, or sunny-warm to brrr-cold in a matter of minutes or a couple of miles.  The rule of thumb regarding weather in these parts is that if you don't like the weather right now, just wait a few minutes.

At Newport we camped at an incredibly sparse "Dry Campground" provided by the city as an overflow lot for the RV tourist crowds.  Facilities in the gravel lot included a porta-potty and a dumpster.  But the location right next to some lovely bike paths that run along the bay to the adjacent state park, as well as immediate proximity to the Oregon Aquarium, make it worthwhile.  One great attraction that's also immediately next door is the Oregon State University Hatfield Marine Science Center, which has a slew of educational exhibits, things for the kids to touch and play with, all for the low, low price of Free!

After Newport we took a detour inland to Corvallis to visit some extended Framily members, Steve and Bobbi, a lovely mini-vacation from our extended vacation, replete with fine dining, real beds, a visit to an awesome shoe factory (Soft Star Shoes, check them out), catching up with my oldest friend, Jim, who also joined the Army about the same time as I, and who also wisely chose to retire a few months back.  And what trip to the Northwest would be complete without a trip to our very own burger franchise, Burgerville!  Tillamook cheese cheeseburger, Walla Walla sweet onion rings, and fresh, local Marionberry shake, wow.  Gluttony requiring days of recovery and detoxification. 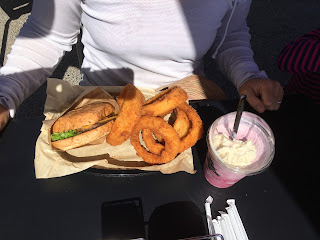 Several blissful days later, we head back to Newport and resume our quest for the North Pole.  We next stopped in Lincoln City.  As we drove through town I searched for The Pixie Kitchen, an incredibly kitschy restaurant that I fondly remembered from my childhood.  When I couldn't find it, the internet provided the answer that sadly, not everyone was endeared to their elvish brand of culinary fare as I had been when my age was measured with but single digits, and alas, The Pixie Kitchen had closed its doors not years, but decades prior.  After its demise, a number of the resident elves subsequently moved to one of the bawdier neighborhoods on Portland's east side, it seems, and cornered the local market on elf bowling.

Further up the coast we stopped at Tillamook.  An obligatory stop at the cheese factory yielded a small cache of cheese curds and a pint of pistachio gelato that rivaled some that Kirstin and I once found in a hole in the wall on the outskirts of Venice, where the proprietor made everything by hand and our guidebook had described the result as "two pistachio nuts making love in your mouth".

We stopped at another Tillamook landmark, a WWII era blimp hangar that is an absolutely immense structure, designed to house eight blimps used in defense of the west coast, but today it houses a modest local air museum. 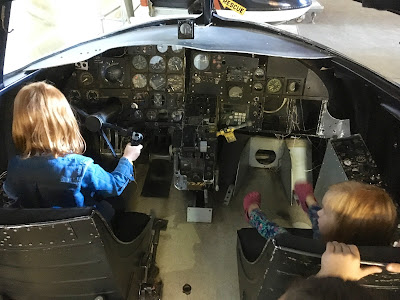 We spent the night at the Blue Heron Cheese Factory, a charming family-owned antithesis to the Tillamook Cheese corporate conglomerate.  Charming hosts and members of Harvest Hosts, a collective of agricultural-focused farms and businesses that provide free parking for RVers.

And then on to Astoria!  I had been looking forward to this part of the trip since its inception, as one of our goals on the Big Adventure is to suss out communities where we might want to relocate at the end of the trip, and I had identified Astoria early on as a potential candidate.  Short version: It's still a contender.
We scored a camp site at Camp Rilea, an Oregon National Guard base adjacent to Astoria.  Lucky for us as all the general public camping was booked solid, plus the camping fees at this sort of place are *very* reasonable.
But there is no free lunch, is there.  In this case it turned out that the designated RV camping is located immediately adjacent to the firing range.  And being that it's summer, that means Annual Training for all of those Reservists around the state.  Nothing like having breakfast to the rhythmic punctuation of machine gun fire.  Or having to explain to your oh-so innocent 3 and 5 year olds what machine gun fire is.

After our initial touchy-feely appraisal of Astoria we turned inland and headed to Portland, my hometown.  It has certainly changed over the years, but for the most part, all for the better.  We showed the girls the house that papa grew up in, and took them to the park that my mum would take me to when I was a tot, along the creek and reservoir where I learned to skip stones.  Alexis played relentlessly in the much-improved-since-I-was-there playground, while Camilla snoozed.  We ate at one of my favorite eateries, the Kennedy School, a former elementary school transformed by the McMenamin brothers into a fantastic hotel with three eateries, three bars (one cigar bar) and a movie theater.  My favorite McMenamin property is still The Edgefield, in Troutdale, but the Kennedy School is great too.

While in Portland we also stopped at the archetypal Saturday Market.  And as we were in the vicinity, we stood in line at Voodoo Doughnuts for about 20 minutes for the privilege of punishing our bodies with basically all the evil things that you can put into one food item.  Delicious.  But with consequences. 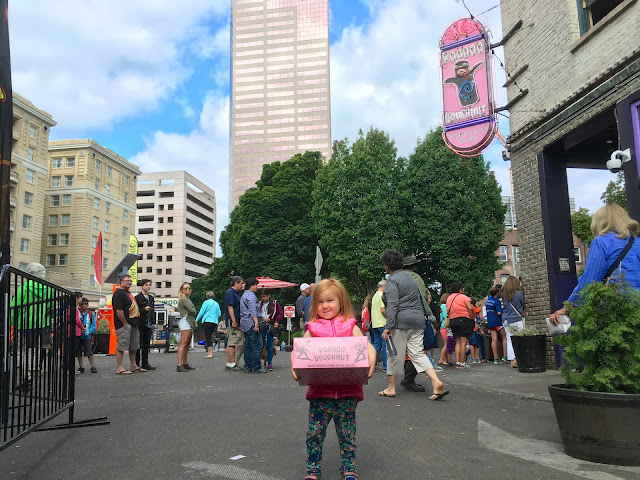 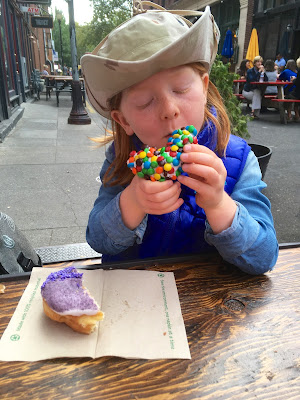 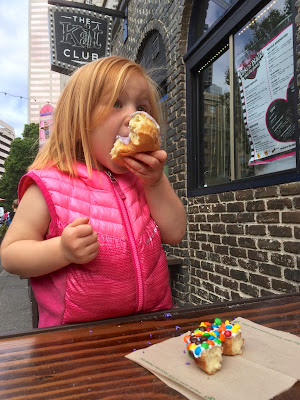 After the initial sugar rush, the girls crashed hard.  Shocker.

But there was one more landmark that I *had* to drag everyone to: Mills End Park, the smallest park in the world, as officially recorded in the Guinness Book of World Records. 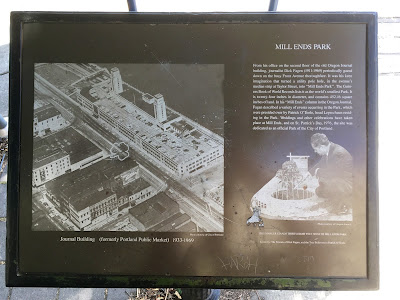 And that, gentle blog-followers, pretty much brings you up to date on the broad strokes of where we've been and what we've been up to.

I'll leave you with just one more brief anecdote, and an unrelated photo.  It's a funny thing that 4WD vehicles are not made to be more operator-error-proof.  For instance, if you were to engage 4WD in order to position and park an RV in moderately sandy conditions, and then after detaching your RV you forgot that you had turned 4WD on, and then you drove around with it on dry roads, your modern, brand-new 4WD vehicle might just go ahead and let you do things that are potentially quite destructive to it's drive train, and not, instead, sound an alarm, or flash a warning light at you, or simply turn the 4WD off.  After owning a fairly fool-proof Subaru for many years, this seems quite counterintuitive to me.  Perhaps the 4WD  truck manufacturers make their vehicles this way in order to create another revenue stream from saps who screw up?

So there we were, after I had just discovered my error, terrified to drive it anywhere out of the parking lot where I had made the discovery when the vehicle finally complained by doing some Weird Things.  Calls to the local dealership were made and they offered a tow and a look-see sometime in the middle of next week.  More calls and internet searches later and a little fiddling around and I got the rear differential's limited slip to disengage, and breathed a huge sigh of relief.  Moral of the story: Never, ever forget to turn 4WD off when you don't need it any more.

Posted by Scott Clifrickson at 7.8.16