I'm the kind of guy who reads the manual when I get a new widget.  Being that guy, I am well aware of the capacities and limitations specified by the manufacturers of both our trailer and our tow vehicle BOB (Beast Of Burden), our Toyota Sienna AWD van.  We love BOB.  Her towing capacity matches the trailer's max weight, so if fully loaded we're topped out, but still within specification.  But how does one ensure you're staying within these limits?  There's really only one way: Weigh Thy Stuff!

We had planned to weigh MATT and BOB just before the movers packed all of our stuff up, so we could easily offload anything on the off chance we needed to.  In all the packing/cleaning/fixing/moving chaos, however, we neglected to get a pre-move weight.

Can you guess where this is going?

Yes.  When we finally did get weighed, after the movers were gone, we were overweight.  And overweight for both the trailer and for the GCWR for the van, which meant we couldn't simply move weight from the trailer to the van.  We had to lose weight completely.  500 pounds.  And the hardest part of this was that I couldn't see any way to do it that did not include ditching our bikes.

Some perspective on what this means to us: Asking our family to travel North America without our collection of highly functional, but weighty, bikes would be like asking a diver to go to the Great Barrier Reef but not dive, a climber to go to the Alps and just look, or a photographer to go anywhere without their camera.  We are a bicycling family, and we could not envision the Big Adventure sans bikes.

Kirstin refused.  She said we had to find another solution.

We pondered and thought, deliberated and evaluated, and then she suggested something I had not considered, because I didn't think it was within the realm of possibility: replace BOB with something that will handle more weight, and then offload the extra weight from the trailer, including the bikes, to the tow vehicle.

We love BOB.  The kids love BOB.  We had always thought we would drive BOB into the dirt.  But faced with giving up the bikes, well...so long old friend. 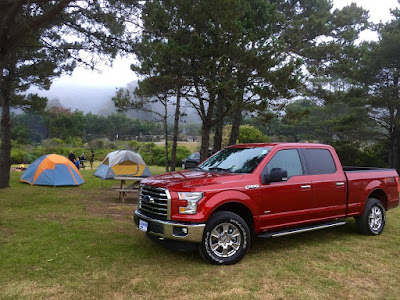 So the moral of the story is this: Unless you want to end up with a sparkly, shiny, new truck, replete with fun doodads, and a big manual describing how to use them all, be sure to Weigh Thy Stuff!
Posted by Scott Clifrickson at 16.6.16